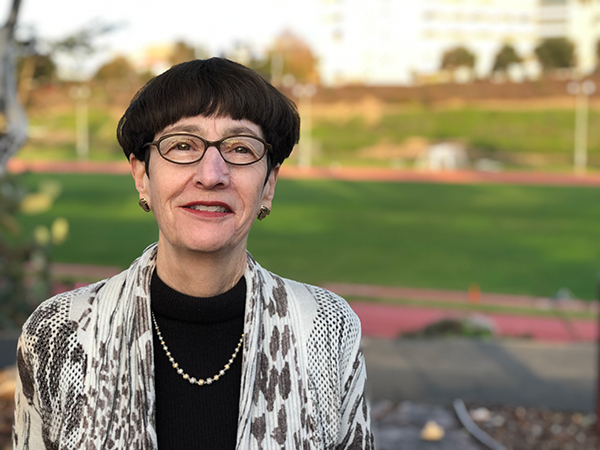 A nurse and longtime healthcare innovator whose entrepreneurial spirit has been fueled by a passion and purpose to improve care for people with serious illness was recently honored by the California State University Shiley Institute for Palliative Care.

“Jill represents the best in our field: a passionate caregiver, inspiring leader, and programmatic innovator,” said the Institute’s Executive Director Jennifer Moore Ballentine. “We’re thrilled to honor her and her team with this award.”

The Institute received roughly 20 nominations in support of Mendlen, many from LightBridge employees who have worked alongside her to provide high-quality palliative and end-of-life care that has transformed quality of life for seriously ill patients and families in San Diego County.

In accepting the award, Mendlen said she was doing so on behalf of LightBridge employees who inspire her every day with their care and commitment to the patients and families they serve. “Life is really about people,” Mendlen said. “It’s always the people that truly make a difference, and that is especially true of our staff. This honor really belongs to them. They are Lightbridge.”

The ceremony honoring Mendlen drew palliative care leaders, advocates, and Institute supporters from throughout the region including Cal State San Marcos President Dr. Ellen Neufeldt, Ruth Westreich of The Westreich Foundation, representatives from the Doris A. Howell Foundation for Women’s Health Research, and many of Mendlen’s friends and colleagues.

Addressing the crowd, Mendlen spoke about the “sacred honor” of caring for people with serious or terminal illness, and the true focus of that important work.

“Hospice is not about dying – it is really about living each day to the fullest,” she said. “Families invite us into their homes, into their lives, during a very critical time and they invite us to walk their journey with them. And I truly believe this is a sacred honor that they give us.”

A generous donation in Dr. Howell’s honor by philanthropist Darlene Marcos Shiley accompanies the annual award and is bestowed on an organization with ties to the recipient; this year the money will go to the LightBridge Hospice Community Foundation, which funds programs that enhance end-of-life care for patients and families in the region.

Dr. Howell was a groundbreaking physician in pediatric hematology, oncology and community medicine who pioneered the hospice and palliative care movement in San Diego.

Mendlen began her remarkable career at age 15 as a certified nursing assistant. She quickly fell in love with nursing, and eventually became an RN working in critical care and emergency medicine. After 10 years of serving patients and families in crisis, she left her nursing job, intending to return to bedside nursing after a short break. That was not to be.

Over the next few decades, Mendlen would launch and lead a series of innovative companies designed to optimize care for seniors and those with clinically complex medical conditions in a variety of settings, from community-based programs to skilled nursing facilities.

Her visionary thinking was evident in the first company she founded, SubAcute Care of America, built on the then-early premise that patients could receive better and more cost-effective care if they were discharged earlier from hospitals into subacute settings like nursing homes.

Ahead of its time, the program was a hard sell for hospitals and insurance companies in the mid-1980s and the company closed within a few years. Since then, the subacute/post-acute care market has become a massive industry expected to hit $481 billion by 2025.

Mendlen spent the next 11 years leading the expansion of a successful nursing home company in Southern California, a role that would give her a state and national platform where she could help shape healthcare policy and reimbursement models through her work with professional organizations focused on advancing care for the frail and elderly.

She later launched Geriatrix Inc, a managed-care program for nursing home residents and for seniors living in the community that grew to 11 locations in seven states before Mendlen departed in the early 2000s.

In 2003, Mendlen founded LightBridge, and a few years later founded Family Choice of New York. Family Choice provides clinical programs to about 1,400 individuals with serious illness or complex care needs in 45 skilled nursing facilities in Western New York. She remains its President and CEO, leading it along with her role at LightBridge.

A Pioneer in Community-Based Palliative Care

In fact, it’s LightBridge that is arguably Mendlen’s crowning achievement. She launched the hospice program in 2003, ready to translate all she had learned about business, serious illness, and quality care into a company that would make a powerful difference in the lives of patients and families, as well as the people who serve them.

From the start, Mendlen emphasized the highest quality care. LightBridge immediately pursued and eventually obtained The Joint Commission’s Gold Seal of Approval. The company’s patient load grew as its reputation soared in the San Diego region and beyond.

In 2007, Mendlen said, she and her staff began to hear about a new medical specialty called palliative care. They embarked on two years of research to try to understand exactly what it was, as well as the nuances of designing and implementing a viable program.

“Palliative care made absolute sense to me and to our team, as it was a natural extension of the care we already provide through the hospice program,” Mendlen said. “Our hope was that we could serve more people along their healthcare journey without requiring them to stop curative treatment, as hospice requires.”

The accolades and accomplishments continued. In 2018, LightBridge achieved The Joint Commission’s new Community-Based Palliative Care Certification, becoming one of the first programs in the nation to do so.

The Future of Palliative Care

Mendlen is the first to acknowledge, however, that considerable challenges remain in building and sustaining a palliative care program in a tumultuous healthcare market in which palliative care services are poorly defined and rarely covered by payors.

“It sounded simple when we started, but we soon learned that launching and growing a palliative care program is not for the faint of heart,” Mendlen said. Still, she is undeterred.

“This kind of care is so important, and the need is only growing,” Mendlen said. “The palliative care movement is really truly in its infancy and we need to continue our efforts to ensure that this invaluable care is available and accessible throughout our healthcare organizations, and that it is fairly reimbursed.”