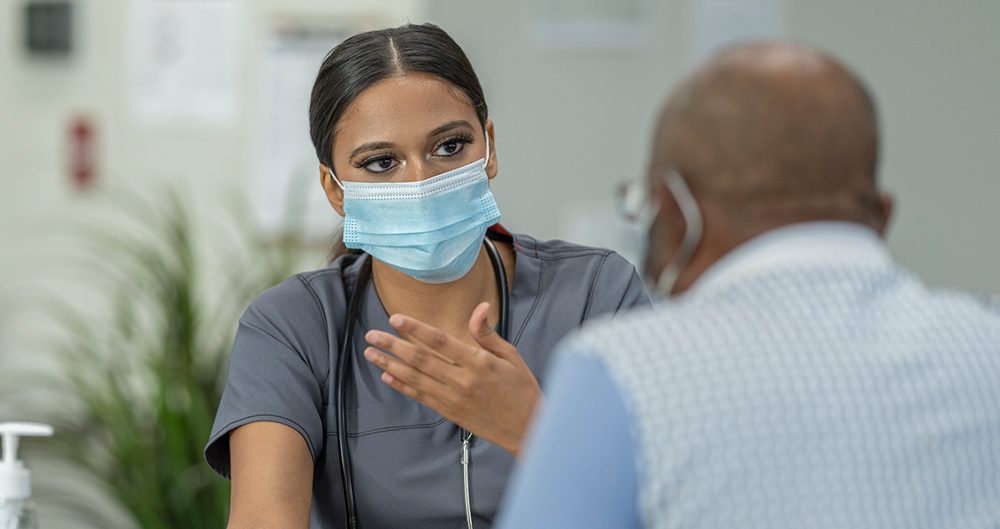 As health care advocates try to make sense of the emerging post-pandemic world, some are looking at health policy to help expand advance care planning (ACP), and completion of advance directives, to capture people’s wishes and treatment choices at the end of life. A recent article in Health Affairs (April 2021) revealed an increase in advance care planning for Medicare beneficiaries between 2016 and 2019, but prevalence remained low, with particular disparities based on racial differences.

Coverage for conversations about end-of-life care options during doctor visits has been offered by Medicare since 2016. But researchers have found that Black, Hispanic, and Medicaid dual-eligible patients, and those with comorbidities, were less likely to have used the advance care planning benefit in their wellness visit, largely because they had fewer such visits overall. The annual wellness visit offers the potential to expand beneficiaries’ access to ACP at no charge.

The coronavirus, with its high incidence of severe, rapidly advancing respiratory distress, long ICU stays, and more than 600,000 deaths reported in the U.S., has focused sharp attention on the need to make advance directives more easily accessible in a medical crisis.

The recent C-TAC (Coalition to Transform Advanced Care) Policy Forum, held virtually on May 12, highlighted a proposal for the elimination of Medicare co-pay requirements for end-of-life visits to doctors, and other providers, not included in the annual wellness visit. C-TAC has made it a priority to remove barriers to coverage and access for Medicare advance care planning counseling services, and to expand the provider types and settings that could bill Medicare for this service. This would include, for example, home-based services and clinical social workers.

There appears to be a regulatory glitch in the original policy, implemented in 2016, which has proven difficult to fix, according to Marian Grant, DNP, ACNP-BC, C-TAC’s Senior Regulatory Advisor. There are no new developments to report on this front, she said in a recent interview.

Interoperability Steps to the Fore

But something that may have more momentum, Grant said, is the issue of interoperability for accessing patients’ advance directives in electronic health records (EHRs) as the patient moves from the hospital to a variety of post-acute settings. A paper advance directive, or a PDF of the patient’s document which is typically scanned into the hospital record, can easily get misplaced and not be accessible when most needed.

CMS has signaled its commitment to fixing this problem by hiring a contractor, Mitre, to work with key stakeholders. The ad-hoc group now meets weekly to try to make advance directives interoperable across post-acute settings. “And if they succeed, they likely will be able to make these interoperable across all health care settings,” Grant says. The group aims to have a draft of implementation guidelines by October.

“This was the best kept secret in Washington. I just stumbled upon it,” said Grant, who has since joined the PACIO—Post-Acute Care Interoperability Community Advance Directive Interoperability Project, which is working on various advanced care planning documents, not just state-sanctioned advance directives. It aims to make the advance directive part of the hospital EHR, which would enable other providers to retrieve the data from the record with a simple click. “It’s not a done deal, but I look on the fact that CMS has hired a contractor as very favorable,” Grant said. More information on the PACIO Project can be obtained at info@PACIOproject.org.

COVID created conditions in which advance care planning interoperability became an undeniable priority for our health systems, project leader Maria Moen said in an interview for a recent C-TAC blog post. “We need to advocate for modernization of ACP… (and) to educate our patients about how their information can move with them and inform care.”

In another development, a group affiliated with the Uniform Law Commission is now working on revising the Uniform Health Care Decisions Act, adopted in 1993 in response to the Nancy Cruzan case. The 1993 act consolidated state laws dealing with decisions about adult health care and power of attorney, and aimed to assist individuals and medical professionals to better ensure a person’s right to choose or reject a particular care or treatment. The uniform act was recommended for all states and adopted by a number of them.

One of the problems with the advance directive process is that state-sanctioned forms are different in each state, and not portable across state lines. “Personally, I would take your advance directive if it were written on a cocktail napkin as better than nothing,” Grant said, but that approach is not enshrined in policy.

Meanwhile, POLST (physician orders for life-sustaining treatment) continues to spread, and is now in various stages of development in most states, along with a number of electronic POLST registries designed to be able to provide access to POLST forms rapidly in a time of crisis. A total of 23 states have mature or endorsed POLST programs and 23 have developing programs. A couple of years ago, a national POLST team agreed on a recommended uniform National POLST Form, and more states are adapting it.

Susan Tolle, MD, of Oregon Health Sciences University, one of the founders of the POLST paradigm movement, wrote an editorial in the Journal of the American Geriatrics Society (March 17) outlining some of the concerns that have been raised by its growth nationwide.

“The push for greater advance care planning can promote over-use of POLST in an effort to satisfy advance care planning measures that include completing POLST as an option,” Dr. Tolle said in a recent email. An example is the incorrect use of POLST for individuals who are too healthy. “As the POLST program becomes more widely adopted, the biggest challenge, in my opinion, is maintaining the quality of POLST use.”

Can Palliative Care Be Provided Entirely From Afar?

Palliative care is a humanistic, patient-centric form of healthcare that includes medical, emotional, and other supportive services for people who are confronting the impacts of a serious illness in many areas of their lives. Some have even called it “hand-holding,” although it involves much more than that.

3-by-3 for Effective Advance Care Planning/Directives

You’ll be hearing a lot all April about National Health Care Decisions Day (April 16) and the importance of doing your advance care planning and completing your advance medical directives. So here’s my wiki on advance care planning/directives, born of 20 years of study and teaching, giving and taking professional guidance, being a patient and a family member of patients many times over.

A space for self-care, reflection, and creative expression to be highlighted at the National Symposium for Academic Palliative Care in San Diego.