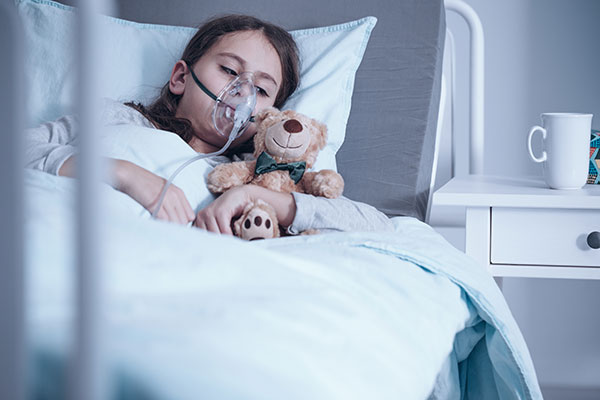 Even the people closest to Mark Bartel have a hard time understanding how he handles the heartbreak that comes with being a pediatric chaplain.

When he first entered the field, his wife worried how it might affect him and whether sadness would follow him home. His older brother put it more bluntly: “I know you’re doing important work, but I don’t ever want to hear about it. Don’t tell me anything.”

Now almost 30 years into his career, Bartel—who manages Spiritual Care at Arnold Palmer Medical Center in Orlando—has mastered the art of selective sharing. He’s seen plenty of happy endings, but arguably his most poignant cases are linked to his work in palliative care, supporting seriously ill or dying children and their families, as well as hospital colleagues caring for them.

Bartel said those experiences have affirmed his belief that we all have key spiritual needs central to our humanity: the need for beauty, integrity, faith, hope and love. Speaking recently to the staff at the California State University Shiley Institute for Palliative Care, Bartel talked about those spiritual needs and how he’s seen them expressed by the patients and families he’s served.

Our need for beauty, Bartel said, was reflected in a 13-year-old with osteosarcoma who he met with several times over the course of her treatment. As death neared, the child ended up in the ICU on a ventilator, unable to speak, yet still able to express what she wanted using hand signals.

One day while Bartel was visiting, the girl motioned that she wanted something. Despite repeated attempts, Bartel struggled—and failed—to grasp her meaning. Embarrassed, he turned to her mother and aunt for help.

“They said, ‘Oh, she wants to turn the bed so she can look outside,’” Bartel recalled. “I felt like a really bad chaplain—I should have picked that up! So we turned the bed a little bit so she could look out the window. But that wasn’t it—she continued to gesture.”

Bartel and her family eventually decided the girl didn’t want to just look outside, she wanted to go outside. Eager to help, the supervising physician signed off and the hospital staff—including nurses, aides, and other caregivers—moved the child and her bed, ventilator, IVs and other machinery through a labyrinth of corridors and down to a hospital playground.

With the girl breathing fresh air and basking in sunshine, everyone started to chatter excitedly, grateful to have granted her request. But the child was still gesturing—she needed something else.

“We all thought, ‘Oh no. Did we miss it again?” Bartel said. “So, for the third time we stopped to think ‘what does she really want?’ And then we finally got it—she wanted us to be quiet so she could hear the birds singing. That’s how she was expressing her spiritual need for beauty.”

Integrity, and the Snare of Mutual Pretense

Other spiritual needs are more painful to work through. Fulfilling the need for integrity, or honesty, can be difficult when a family is struggling to accept or acknowledge a child’s worsening illness, Bartel said. That can lead to “mutual pretense,” where the parents and child and even healthcare staff pretend that a diagnosis is not terminal.

That was the situation with a 12-year-old girl hospitalized with advanced cancer, who bitterly and repeatedly lashed out at her care team and anyone else who came through her door, Bartel recalled.

He and one of the hospital’s child life specialists discussed what might be causing her anger and how to address it. The specialist hit on the answer—the child was upset because she realized no one was telling her the truth about her illness.

Bartel and his colleague encouraged the parents to be honest with their daughter: “We said ‘she knows very well what is going on, and no one will talk to her about it. That would make you angry too.’ ”

The parents eventually summoned the courage to tell their child she was dying, and the revelation lifted a weight, said the mother, who talked again with Bartel after the girl died on hospice care.

According to the mom, “(After that conversation) we were lying in bed, just me and my daughter, and she said, ‘I’d like to ask you something because I’m going to die: What is it like to have a baby? I’ve always wondered what that’s like and now I’ll never get to do that.’”

Bartel said the pair “had this beautiful conversation, just lying there together in bed, about all these things that young girl had wondered about. Those are moments they would have missed if they had remained stuck in mutual pretense. Honesty is everything, it really is.”

‘Hope Gives Purpose to Our Strength’

Bartel said he’s also learned that hope is vital to children and families experiencing a medical crisis or life-limiting illness.

“If you see anyone who’s courageous in their battle it’s because they have hope,” he said. “There’s something they’re going for and a reason that they’re moving on. In a children’s hospital, hope is everything. We’ve got to have that and the parents hang on to that, and we talk a lot about that with the staff.”

In the context of terminal illness some might see that as denial—but hope is actually “the opposite of denial,” Bartel emphasized.

“Denial is refusing to look at the situation—it’s like turning around and going ‘I’m not going to deal with that,’” Bartel said. “Hope is looking directly into the eyes of the problem and then looking over its shoulder and seeing something better. Either the problem is going to go away—which might mean a miracle—or there’s going to be a good outcome in another way. Hope is obviously what we’re shooting for. Hope gives purpose to our strength.”

When Faith is Tested

Faith is also one of the big spiritual needs we all share, Bartel said. Though it means different things to different people, it’s a fundamental lens through which a person makes sense of the universe. When a child experiences serious illness, faith can be strengthened, shaken, or shattered.

“It’s not a surprise, but it’s a huge thing we’re looking for when we work with these families,” Bartel said. “‘Why is this happening? Is it my fault? Is God punishing my child because of me?’ All these questions come up when people are going through this kind of crisis.”

He shared the story of one couple whose young son was diagnosed with brain cancer. The mother was intensely dedicated to her boy—“you could see him just look up at his mom with such love in his eyes, it was just beautiful,” Bartel said. Church had been a big part of the family’s life, but the parents stopped attending after their son’s diagnosis.

The boy had a type of brain tumor that is almost invariably fatal, but miraculously, he didn’t die. He contracted a fungal infection in his brain that Christmas and, inexplicably, his cancer stopped growing. He has now lived well into adulthood. While his parents are grateful, they still have not returned to church, Bartel said. They were deeply affected by their son’s experience in a way that they haven’t resolved with their faith.

The Power of Love

Love may seem like an obvious spiritual need, but how deeply it connects us is something that Bartel sees again and again.

He recounted the story of one young lady with cystic fibrosis who, in the final days of her life, asked to be put on a ventilator—a request that worried the palliative care team, knowing it would cause her great discomfort and only briefly delay the inevitable.

“Anyone familiar with that disease knows a ventilator is not a good idea,” Bartel said. “It’s not a bridge to something better—it’s just a miserable life and then, when you take it out, the end is not good. We couldn’t believe she was choosing that.”

But the patient quickly made clear her reasoning. Her mother was in another hospital undergoing breast cancer treatment, and the girl didn’t want to die until her mom could be with her.

“That connection was just so strong,” Bartel recalled. “So we did what she asked. We put her on the ventilator for a couple days, until Mom was able to get there. And at the end they were there in the hospital bed together, and we took that ventilator off, and she was able to be with her mother.”

The Importance of Palliative Care

In light of, or perhaps because of, these experiences Bartel said, he’s grateful to work in a hospital system with a strong palliative care program. He sees early accessibility to palliative care as crucial to best supporting patients and families facing serious or life-limiting disease.

In his leadership role, Bartel supervises the team of chaplains at Arnold Palmer Medical Center, and is also involved with the Pediatric Chaplains Network, a national advocacy group. He said he believes the field of spiritual care will continue to grow.

“When you enter chaplaincy—or work in palliative care—it’s got to be a calling and it’s got to be pretty deep,” he said. “Through this work I have learned all sorts of things and met some amazing families and children, including many who are going through horrible things. I’m not going to watch them walk off into a dark forest alone. Someone needs to walk alongside them. Why not me?”

Hospice and palliative care nurses play an important role in understanding the care needs of LGBT patients, honoring their journey, and promoting awareness and inclusivity within the inter-disciplinary team.

For hospices and home health agencies, home health aides are vital members of the care team. But in other models of home and community-based care, their roles may be less clear. Offering them meaningful career development opportunities can go a long way in helping to address disparities in palliative care.

Before COVID hit, Resolution Care Network – a telemedicine palliative care service in Eureka, Calif. – employed community health workers (CHWs) as an extension of its interdisciplinary palliative care team. They were the agency’s feet on the ground, its eyes and ears in the field, said CEO Michael Fratkin, MD.