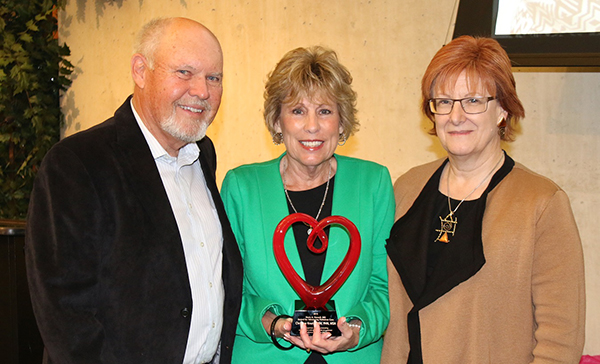 A nurse educator whose passion for improving care for people with serious illness has made a profound impact on countless patients, families, and healthcare providers in the San Diego region has been recognized by the California State University Shiley Institute for Palliative Care for her remarkable contributions to the field.

Christine Knutson, RN, MSN, was presented with the Institute’s 3rd annual Doris A. Howell, MD, Award for Advancing Palliative Care during a Jan. 10 ceremony that also celebrated the life and legacy of the legendary physician for whom the award is named. Dr. Howell died Nov. 23 at age 94, just shy of her 95th birthday.

Dr. Howell was a groundbreaking physician in pediatric hematology, oncology and community medicine who pioneered the hospice and palliative care movement in San Diego. Palliative care works to address the physical, psychosocial, and spiritual suffering that can accompany serious illness, and gives patients a defining voice in the treatment they want, or don’t want, at the end of life.

Fittingly, Knutson developed a special relationship with Dr. Howell while working at San Diego Hospice in the late 1990s. They worked together to create the San Diego Coalition for Improving End-of-Life Care—one of several education and community outreach organizations fueled in part by Knutson’s unique combination of warmth, enthusiasm, and tenacity.

Knutson was nominated for the 2018 Howell award by several peers and colleagues from the San Diego Coalition for Compassionate Care (SDCCC), of which she is a founding member. A generous donation in Dr. Howell’s honor by philanthropist Darlene Marcos Shiley accompanies the annual award and is bestowed on an organization with ties to the recipient; this year the money will go to SDCCC.

“This has been an amazing journey,” Knutson said in accepting the award. “I’m so grateful to the Institute for honoring Doris in this way, and I am honored beyond words to be this year’s Howell award recipient. I know Doris’ legacy of education and outreach will continue, as palliative care touches so many lives and so many people.”

Knutson said palliative care has been a thread woven throughout her 40-plus-year nursing career. In fact, her interest in transforming care for patients with serious illness began long before palliative care was a recognized specialty and concepts like advance care planning even had a name.

She has implemented palliative care’s patient-centered, whole-person principles in a wide range of roles in pediatric and adult medicine, developing new programs and leading outreach and education in diverse settings including acute care, long term care, home health care, and hospice. But it’s her work in the community that has arguably made an even larger impact, said Jennifer Moore Ballentine, Executive Director of the CSU Shiley Institute for Palliative Care.

In 2000, after journalist Bill Moyers launched “On Our Own Terms,” a pivotal four-part PBS series on transforming end-of-life care, Knutson worked with Dr. Howell and the San Diego Hospice Foundation to organize a town hall meeting where they began a dialogue about uniting the community and local hospice providers with a common mission to improve quality of life for patients and families with serious illness. From that, the San Diego Coalition for Improving End-of-Life Care was born.

“For the first time we had all 18 hospices in one room—a conference room at Doris’ apartment building in La Jolla” Knutson recalled. “She turned to me and said, ‘Can you believe this Chris? All the competitive hats are off and we’re all here, talking about what’s really important and how we can make a difference.”

In 2009, when California began its Physician Orders for Life-Sustaining Treatment (POLST) program, Knutson was among the first certified trainers, working to equip other providers with POLST and advance care planning skills. She joined the San Diego POLST Coalition and later was a founding member of its successor, SDCCC, through which she has continued to educate others about the power of palliative care.

“While most people might pursue the ambition to be a nurse or a teacher, and have either one be plenty challenging, Chris seems to have been born to do both—and she pursued both callings with passion,” said Ballentine. “Through her relentless efforts of teaching, persuasion and persistence, she has trained thousands of clinicians in advance care planning, POLST, palliative care, and advocacy. The entire community is in her debt. She is a walking monument to the idea that one person can change the world.”

Even in what is supposed to be retirement, Knutson has remained a palliative care dynamo, recently logging a 12-hour day teaching students at Cal State University San Marcos about improving care for patients with serious illness. Knutson said she’s only pursuing her passion, and following the example set by Dr. Howell.

“We have an ethical and moral mission to provide palliative care and move things forward,” Knutson said. “As Doris would say, ‘speak from your heart, do the right thing, and it will all unfold.’”

In a tribute to Dr. Howell delivered at the award ceremony, Helen McNeal, the Institute’s Founding Executive Director, said, “there are people you meet in life who, from the moment you meet them, live on in your heart. Doris Howell was one of those people… She greeted you with eyes that saw who you were at heart and welcomed you warmly.”

McNeal noted that as a young woman in the 1940s Dr. Howell “set a high bar for herself and then set out to soar over it—and soar she did.” She pursued a career in medicine in an era when few women became doctors, and then chose the medically and emotionally challenging specialty of pediatric oncology.” She soon became an educator of other doctors, serving on the faculty of the medical schools at Duke and Harvard universities.

In 1968, Dr. Howell met Dame Cicely Saunders, an English Anglican physician, nurse and social worker who founded the modern-day hospice movement. After hearing her speak, “Doris was hooked,” McNeal said. “As a pediatric oncologist she had seen the worst of suffering associated with end of life and she knew she had found a better way.”

In 1974, Dr. Howell joined faculty at UCSD and brought with her to San Diego her passion for hospice and palliative care. She founded San Diego Hospice and led it through its very turbulent early years until it became a model for hospice and palliative care across the country. Though the hospice closed in 2013, “it lives on in the hearts and caring practices of thousands of people who worked there, trained there, and who carry on Doris’ legacy, not only in San Diego but around the world.”

After Dr. Howell stepped away from practicing medicine, she remained passionate about changing healthcare and created the Doris A. Howell Foundation for Women’s Health Research, which is dedicated to making a long-term, positive impact on women’s health. Since 1995, the foundation has provided 241 scholarships and awarded $681,000 to women’s health research projects. Several representatives of the Foundation attended the Jan. 10 awards ceremony.

Ensuring everyone has access to whole person, patient-centered care remains Dr. Howell’s enduring legacy. “Dr. Howell knew that palliative care is the answer to changing the journey of serious and chronic illness that so many of us will face,” said Cathy Baur, Executive Director of the CSUSM Foundation and Vice President of University Advancement at CSUSM, who presented the 2018 award to Knutson. “I’m pleased that the CSU Shiley Institute for Palliative Care, one of the important forces to making this change a reality, had its start here at Cal State San Marcos.”