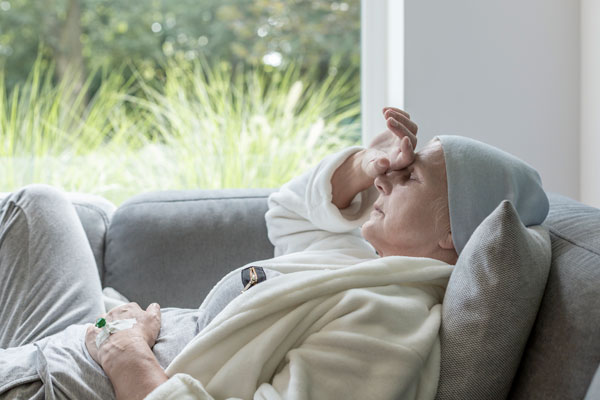 Palliative care patients tend to have a high symptom burden. Sometimes, this is characterized as mild and for others it is severe, creating a breeding ground for suffering to occur. Physicians, nurse practitioners and nurses offer patients a variety of medications that can mitigate and relieve symptoms common in serious illness such as pain, anxiety, and shortness of breath, to name a few.

These interventions, however, are sometimes insufficient in addressing the whole of the symptom. Thankfully, medications can be augmented by non-pharmacological symptom management techniques that may be able to produce an even better response.

Joan presented to the Emergency Department in a pain crisis, doubled-over in her wheelchair as she clutched her abdomen with a slow trickle of tears on her cheek. She moaned when the pain spiked as her weary husband relayed his wife’s pain experience of the last 12 hours to the triage nurse. Joan was quickly roomed and an IV was started to administer a short-acting opiate; a palliative care (PC) consult was also placed.

A PC physician and PC social worker reviewed the chart and headed to the ED to assess the patient. Joan awakened easily to the voices of the PC team and reported her pain was down from a 9 to a 4. Joan was able to provide a good recent history. As she was speaking about how long she had been in pain, she tearfully said she didn’t know how she could possibly go home again “because the pain is so brutal and I have no recourse if my meds don’t work.” Her breathing rate increased, she appeared restless and looked as though she was about to have a panic attack.

The PC physician recommended starting her on a long-acting medication and increasing Joan’s breakthrough opiate regimen; she also ordered Lorazepam as a PRN. Joan was amenable to these changes but remained visibly worried.

When a patient is in a pain crisis and is waiting for help—either in the hospital after pressing the call light, waiting for someone on the hospice emergency line or simply waiting for a rescue dose of medication to take effect—it is very common for the patient to become anxious. When one is anxious, she or he is no longer in the present moment but in a future state.

In the circumstance of a pain crisis, for example, patients become anxious when they begin worrying about how long the pain will go on before they get help. Sometimes, this worry becomes so overwhelming as to make the person feel as though they cannot survive if the pain continues at its current intensity.

The “if” is key here. The patient is surviving in the moment, but when they are catapulted into the future by anxiety, they believe they cannot survive. This very normal, distressing state of anxiety can also exacerbate the pain.

In these cases, medications remain essential. They are the first and best line of treatment; however, coupling them with non-pharmacological symptom management techniques can mitigate the symptoms and help the patient feel capable of getting through the often-inevitable waiting period that accompanies living with a serious illness.

Pain crises can generate a sense of tunnel vision and a singular focus on an unbearable worry that the pain may (or will) continue without relief. Patients ought to be educated on the role anxiety plays in exacerbating pain, and how rooting oneself in the present can interrupt the anxious state that depends on the person frantically worrying about the future. Once patients have this understanding, they are more equipped to recognize it when it occurs.

Recognition is the first (and crucial) step. Next, a symptom management technique can be utilized. It is recommended to educate patients on a variety of techniques so they can select one that resonates with them, or feels the least intimidating to try.

Circling back to Joan:

The palliative care social worker (PCSW) made the observation that Joan appeared worried. Joan agreed, stating she had felt increasingly anxious about pain control as her cancer progressed.

The PCSW provided her with psychoeducation on manifestation of anxiety in the context of a pain episode or crises, and Joan expressed appreciation for the information. She replied, “I can’t even see straight when the anxiety comes on like that, let alone think clearly.”

The PCSW asked if Joan would be interested in adding some resources for coping to her toolkit. Joan said she was willing to try anything. The PCSW provided information about mindfulness, deep breathing, the Instant Calming Sequence, the 5-4-3-2-1 Coping Technique, and guided imagery. Joan selected the 5-4-3-2-1 Coping Technique to try. Her husband welcomed this, as he felt he could cue Joan in the moment at home to engage in the technique while he called an on-call RN for help.

The additional interventions made a difference for Joan:

Two days later, after Joan’s new pain regimen was up and running and she proved to be tolerating it well, Joan was able to return home. She opted to enroll in hospice care for ongoing symptom management and the extra layer of support it provides.

By the time she was discharged from the hospital, she had practiced the 5-4-3-2-1 Coping Technique three different times (at the encouragement of the PCSW. Joan reported she was “amazed at how it so quickly got me out of my head and brought me back to the present moment.” She reported feeling more equipped and calm about the prospect of going home.

Five weeks later, Joan died peacefully in her home, surrounded by loved ones. The PCSW made a condolence call to Joan’s husband, who reported that he and Joan felt they had the resources they needed to get her through the end of life. The husband added that “the pain medications they started in the hospital (and) we continued (at home) were wonderful, and Joan was able to use the coping sequence as she waited for the breakthrough dose to take effect. Her anxiety finally felt manageable.”

The value of these interventions is significant, and palliative care social workers are uniquely suited to provide the psychoeducation of non-pharmacological symptom management to patients. If you do not use them already, we encourage you to familiarize yourself with them and incorporate them into your clinical practice.

Jennifer Hopping-Winn, LCSW, earned her Master of Social Work degree from UC Berkeley. She has worked as a medical social worker for 12 years and as a palliative social worker for five in a variety of health systems, the longest with Kaiser Permanente. She sits on the Oregon POLST Education Committee and the National POLST Paradigm Task Force’s Research and Quality Committee. She has worked with CSU’s Institute for Palliative Care since 2016 and resides in Portland, Oregon with her spouse and two young children.