Prognostication: Why Talking about Death is Important for Patients, Clinicians 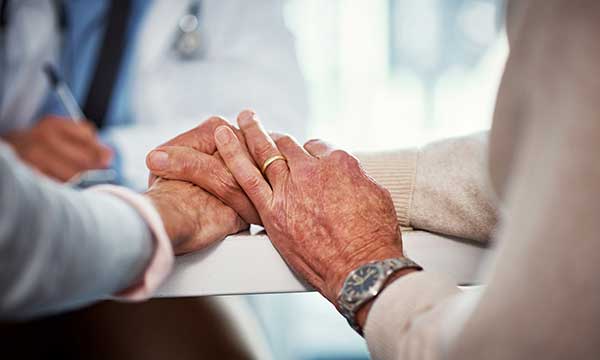 If there were a Richter scale for difficult conversations, telling someone they’re going to die would register 10.5. But research shows that patients with serious illness not only want that information, they want an estimate of when death might occur – and many want to hear it from a physician they know and trust: their primary care doctor.

Prognostication, or predicting the probable outcome of a particular disease based on medical knowledge, is as old as medicine itself, yet research suggests it’s still difficult for many clinicians. In one large survey, 57% of internists reported inadequate training in prognostication despite needing this information frequently (Christakis & Iwashyna, 1998). Another study, in the European Journal of Internal Medicine, called prognostication “the lost skill of medicine” (Kellett, 2008).

Palliative care experts say better training and education about prognostication – including how to do it, and why patients want it – can make physicians more in confident talking with patients about disease trajectories, and ultimately help improve quality of life for patients and families experiencing serious illness.

Knowledge (about Disease Prognosis) is Power

The benefits of prognostication – for patients, families and physicians – have been outlined in several studies. Research involving surrogate decision-makers found that hearing a disease prognosis helps patients and families prepare for loss, while still hoping for the best; fosters trust in doctors; and aids in decision-making (Evans, 2009). Receiving an evidence-based prognosis also allows patients to make informed treatment choices, while avoiding unnecessary procedures or those that would bring little benefit. For example, some routine cancer screenings should be discontinued when life expectancy is thought to be less than 10 years.

Primary care physicians can play an important role in sharing disease prognosis, say experts like Mara Schonberg, MD, MPH, an Associate Professor at Harvard Medical School and a physician and researcher at Beth Israel Deaconess Medical Center in Boston. In a 2016 article published in the Journal of the American Medical Association Internal Medicine, Schonberg wrote: “Primary care clinicians are well positioned to help patients understand how prognosis affects their likelihood of benefitting or being harmed by different medical interventions. Primary care clinicians often have long-standing relationships with their patients and know their patients well. The strength of these relationships is critical for successfully conducting difficult conversations.”

But challenges persist. A 2017 study out of the University of Michigan led by Claire Ankuda, MD, MPH, showed primary care physicians are less likely to refer dying patients to hospice than hospital clinicians, in part because PCPs might not recognize when a patient’s life expectancy is 6 months or less.

“There’s some evidence that the longer the doctor knows a patient the more difficulty there is in prognosticating when that person might be hospice eligible,” said Ankuda, who is now a palliative fellow at the Icahn School of Medicine at Mt. Sinai in New York. “Physicians with longstanding relationships with their patients might not be having the conversations with them because of inaccuracies of prognostications.”

Even when physicians know the prognosis, talking about it with patients and families is hard. “Doctors I guess are just like everybody else. Death makes us uncomfortable,” said renowned Boston surgeon and “Being Mortal” author Atul Gawande, in a 2015 interview with the German news magazine Der Spiegel. “In medicine we’re drawn to the problems we can fix.”

Gawande, who also writes for The New Yorker, is one of several prominent voices changing the way we think about dying in America, saying the focus should be on living well until the very end, not extending life at all costs. “We are reluctant to talk about the topic of death,” Gawande said in the Der Spiegel article. “But as soon as you open the door and make it OK to discuss, it’s amazing how frank and honest people are.”

Training can make a big difference. Methods and tools for accurate prognostication, and strategies for sharing that information with patients, are covered in Primary Palliative Care Skills, a new curriculum for primary care providers developed by the California State University Shiley Institute for Palliative Care. The series of nine self-paced courses also covers concepts like advance care planning, pain and symptom management, psychosocial aspects of care, and how to efficiently integrate palliative care into a primary care practice.

“Generalist clinicians are the key to meeting the palliative care needs of our growing seriously-ill population,” Adkins said. “This self-paced curriculum offers primary care and other specialist providers the knowledge and skills to integrate palliative care into their clinical practice with the goal of improving the quality of life of patients and their families.”