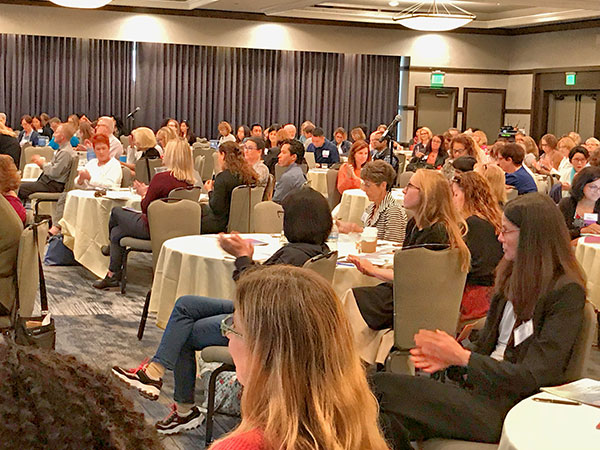 Dr. Christine Ritchie’s journey as a palliative care leader and visionary started in an unlikely place – down a rural dirt road in southeastern Kentucky where, though she had yet to enter medical school, Ritchie was asked to care for and preside over the death of a woman dying of cancer.

At the time, the untrained Ritchie had been shadowing a nurse practitioner on home visits to mostly underserved populations in the mountains. The NP left her at the dying woman’s home with instructions to “be with these folks while I go take care of more urgent things.” For Ritchie, the experience was transformative.

“The honor of being with this woman and her family during that sacred journey had a profound impact on me,” said Ritchie, now a board-certified geriatrician and palliative physician. “From that point on I was drawn to the care of those who were seriously ill.”

In the years since, Ritchie, MD, MSPH, FACP, FAAHPM, has helped move palliative care into a medical specialty recognized as the gold standard for patients with serious illness. She is poised to advance it further as the new Minaker Chair in Geriatrics and Director of Research for the Division of Palliative Care and Geriatric Medicine at Massachusetts General Hospital (MGH).

Ritchie will share her journey and insights as a palliative care educator, researcher, and leader in a keynote address at the National Symposium of Palliative Care Education and Research, Oct. 11-12 in San Diego. The theme of the 2019 Symposium is “Advancing Palliative Care: Leading into the Future.”

A New Role at Massachusetts General

Ritchie’s role at MGH reflects an “incredible confluence of people with shared values wanting to expand the conversation around aging and serious illness, at Massachusetts General,” she said.

She is stepping into the position Sept. 4 after 7.5 years at the University of California, San Francisco School of Medicine, where she was the Harris Fishbon Distinguished Professor in Clinical Translational Research and Aging, and medical director of Clinical Programs in the UCSF Office of Population Health. She also co-leads the Palliative Care Research Cooperative, a National Institute of Nursing Research-funded initiative that supports palliative care research training and implementation across the country.

At MGH, she will establish a Center for Aging and Serious Illness Research at the hospital’s Mongan Institute. MGH leadership is “committed to developing a research program that is inter-professional, cross-disciplinary and leverages the strengths of the scientific community at Mass General, Harvard, Boston, and beyond to increase our evidence base,” she said.

Though the field of palliative care has grown significantly over the past 20 years, there remains significant gaps in research and high-quality clinical practice, Ritchie said. Expanding the evidence base is crucial to improving care for people with serious illness and their families.

“When you spend time caring for folks who are seriously ill, you can’t help but wonder if what you’re doing has a strong evidence base to support it,” she said. “Unfortunately, much of what we do in palliative care and hospice is based more on tradition than on evidence – in large part because people with serious illness are routinely excluded from studies.”

“The gaps in our knowledge are pretty profound,” Ritchie said. “We need to better understand what the best interventions are for people who are sick with any sort of serious illness, whether it’s heart failure, advanced lung disease, cancer, dementia, or multiple chronic conditions.”

The dearth of palliative care research for those with dementia and multiple chronic conditions is especially stark, said Ritchie, who is hoping to help turn the tide in the years to come.

Geriatrics and Honoring the Aging

Ritchie’s passion for palliative care dovetails with her passion for geriatrics, which was inspired by a childhood spent in South Korea where her parents – both medical professionals – devoted 37 years of service following the Korean War. Her father was a surgeon and her mother was a medical technician.

“Growing up in Korea was an incredible privilege for which I’m very grateful,” Ritchie said. “In Korea, Confucian ideology fostered respect for elders. So an important part of my philosophical construct and underpinning has always been an appreciation for the value of people who are further along life’s journey than I am.”

Her devotion to geriatrics and palliative care deepened after medical school through a series of personal and professional experiences. “I had the opportunity of having my grandmother live with me, and then caring for my own parents who lived with me when they were at the end of their lives,” Dr. Ritchie said. “All of those personal experiences influenced my broader professional understanding of what it means to live richly as one’s age and illnesses advance.”

After achieving her board certification in palliative care, she began training other faculty and clinicians in the emerging specialty. She created new palliative care programs, published her own research, and eventually began leading national initiatives aimed at advancing the field.

In her Symposium keynote, Ritchie will share important lessons she has learned in her journey as a palliative care innovator, including what it means to be a leader.

“Leadership is more about a state of mind than it is about a position,” she said. “Where there are challenges, we need leaders to help solve them, to step up, to have courage, to do the hard work of giving up their own personal agenda for the good of the whole, for the public good.

“We have been fortunate in palliative care to have many pioneers that moved the field to a place where palliative care is more accessible. We have the opportunity to start leading institutions and health systems from within and without, in a way that would not even have been considered feasible prior to the last decade or so,” Ritchie added. “Now we can have a “seat at the table” in conversations related to research and care delivery for people who are seriously ill. We need skilled people in those positions who are willing to do the work of listening hard, learning from others, and building consensus – and leadership is key in all of that.”

The CSU Shiley Institute for Palliative Care’s annual Symposium draws together leading palliative care educators, clinicians, and researchers from universities across the country to ensure that palliative care concepts are woven into academic, clinical, and non-clinical education.

Register now to secure the Early Bird rate for the 2019 Symposium, Oct. 11-12, at the Sheraton San Diego Hotel and Marina, Bay Tower. For more information, visit our Symposium detail page here or call 760-750-7289.

Can Palliative Care Be Provided Entirely From Afar?

Palliative care is a humanistic, patient-centric form of healthcare that includes medical, emotional, and other supportive services for people who are confronting the impacts of a serious illness in many areas of their lives. Some have even called it “hand-holding,” although it involves much more than that.

3-by-3 for Effective Advance Care Planning/Directives

You’ll be hearing a lot all April about National Health Care Decisions Day (April 16) and the importance of doing your advance care planning and completing your advance medical directives. So here’s my wiki on advance care planning/directives, born of 20 years of study and teaching, giving and taking professional guidance, being a patient and a family member of patients many times over.