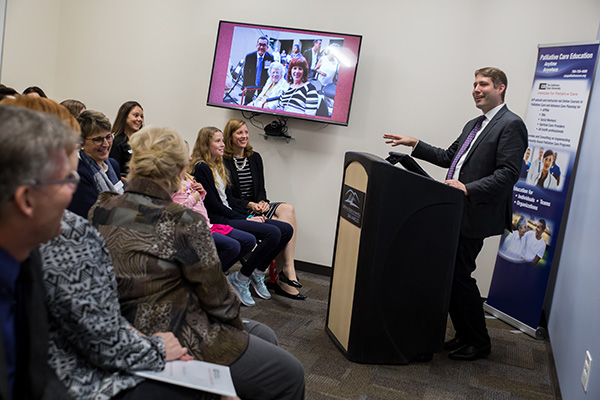 It’s remarkable to think about the early visionaries and clinicians who were instrumental in forging a path to whole-person, patient- centered care. Consider the incredible impact of Cicely Saunders, the English nurse, social worker and physician whose act of compassion for David Tasma, a young terminally ill cancer patient, led to the birth of the hospice and palliative care movement, which would spread throughout the world.

San Diego found its own palliative care pioneer in the legendary Dr. Doris Howell, who followed in Dame Cicely’s footsteps. Before coming to San Diego, Dr. Howell trained in pediatric hematology, oncology, and community medicine in the 1940s, and was a faculty member at Harvard and Duke Schools of Medicine. She was the first woman to chair a U.S. medical school in pediatrics, in an era when it was not a standard practice for physicians to care emotionally for their patients. Quite honestly it was not an accepted practice and is not a standard practicing norm today.

In 1968, while practicing in Pennsylvania, Dr. Howell met Dame Cicely during a lecture presentation. This meeting solidified Dr. Howell’s beliefs about how to best support patients at the end of life.

After assisting in the development of a hospice in Philadelphia, Dr. Howell accepted a job in 1974 as a professor of pediatrics at the UC San Diego Medical Center. By happenstance, on an airplane she met local philanthropist Joan Kroc, the wife of McDonald’s founder Ray Kroc. Their conversation led to grant funding from Joan Kroc to start a small hospice facility.

Over the next several years, with continued support and participation from Mrs. Kroc, that hospice facility expanded and became San Diego Hospice & Palliative Care. Although that organization is no longer in operation, for decades it served thousands of San Diego County residents, ultimately improving their end of life experience.

The incredible contributions of Dr. Howell and Dame Cicely are particularly inspiring given the barriers both leaders experienced when pushing forward a new ideology for patient care. Their unswerving tenacity and perseverance revealed true leadership.

Over the past 30 years numerous healthcare practitioners have devoted themselves to improving the lives of their seriously and chronically ill patients. In San Diego County, talented and compassionate healthcare professionals have made significant contributions in advancing palliative care within their own organizations and facilities, through research, patient care, best practices, systemic and policy change.

The CSU Shiley Institute for Palliative Care is extremely proud to honor Dr. Howell’s legacy with the Doris A. Howell, MD, Award for Advancing Palliative Care, which is given each year to a San Diego County professional whose contributions have significantly improved care for seriously ill patients and families.

All Howell award recipients are examples of providers who have enhanced or advanced palliative care in the San Diego region and truly impacted the lives of seriously ill patients and their families.

Nominations for the 2018 Doris Howell awards are being accepted through Nov. 12. For more information, click here or contact the Institute at 760-750-4006.