A Nurse’s Journey – Delivering Palliative Care Around the World 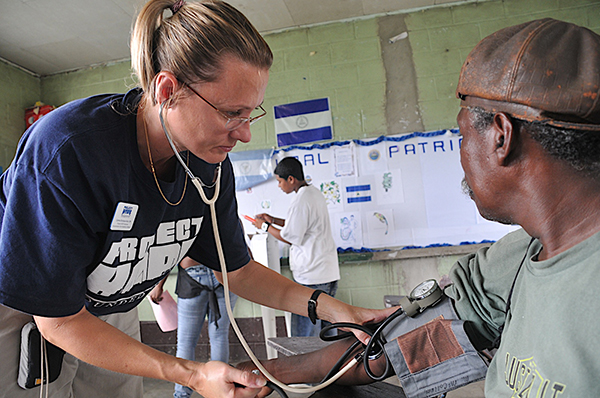 As a military nurse working on the oncology floor at Naval Medical Center San Diego, Carma Erickson-Hurt could see the physical, psychosocial, and spiritual suffering affecting patients and families in the throes of serious illness.

She felt there had to be a better way. And when she learned about palliative care, she knew she’d found it.

Now retired from the Navy, Erickson-Hurt devotes much of her life to educating other nurses and clinicians about palliative care, and to applying and teaching its whole-person model as a volunteer in disaster-relief efforts around the world.

She also serves on the faculty of the CSU Shiley Institute for Palliative Care, where she helped develop the RN Certificate in Palliative Care, an 8-week, online course for nurses who want to better serve patients with serious illness.

Discovering the Power of Palliative Care

Erickson-Hurt said her eyes were opened to the power of palliative care years ago after winning a scholarship from the Oncology Nursing Society of San Diego for a two-day ELNEC course in palliative care.

Inspired by what she learned, she urged her supervisors at the Naval Hospital to create a palliative care program. The director of nursing enthusiastically agreed—but pointed out there was no money to make it happen.

Undaunted, Erickson-Hurt encouraged her colleagues to get palliative care training. Together they began introducing palliative care at the hospital in whatever ways they could.

“We became empowered and started talking to patients and families about advance directives,” Erickson-Hurt recalled. “We wrote some comfort care orders, and eventually created two comfort care suites. Everyone just got really passionate about palliative care.

“And because the nurses were educated, we connected with our patients on a much deeper level,” she said. “We weren’t afraid to have discussions about what was important to them.”

She said one of her most poignant memories of that time involved a terminally ill patient who was being treated in one of the hospital’s comfort care suites. He and his wife had been married less than a year.

“In talking with them, we learned how much they both wanted to reach their one-year wedding anniversary,” Erickson-Hurt said. “It was two months away, and it was pretty clear he wasn’t going to make it, so we decided to hold a special little anniversary celebration in his room—just a fancy dinner for them, with some little candles and balloons.”

“You could see how much it meant to him,” Erickson-Hurt recalled, “and it gave his wife an amazing memory to carry forward.” The patient died a few days later.

Though such experiences are unforgettable, Erickson-Hurt said palliative care mostly focuses on people living with serious illness. It should not be confused with hospice, a type of palliative care available only to patients nearing the end of life.

“Hospice is just one subset of palliative care,” she said. True palliative care can be offered at any stage of illness and is designed to manage symptoms and alleviate suffering so that people can live their best lives possible.

“We have to get away from people thinking that palliative care is all about death and dying,” Erickson-Hurt said. “It’s not.”

Getting more physicians, nurses, and healthcare professionals trained in primary palliative care is vital to removing the barriers and biases that prevent people from experiencing the benefits of palliative care.

“Whether you’re working with patients at the beginning of life or the end of life, in whatever specialty, you still need skills in palliative care,” she said. “It’s about treating the whole person, and it encompasses the entire lifespan.”

Delivering Palliative Care Around the World

Erickson-Hurt has taken her palliative care skills around the world, providing training in palliative care and end-of-life nursing as a volunteer with Project Hope, a global health and humanitarian relief organization that has worked in more than 100 countries over the past 60 years.

When she first started working with the group 10 years ago, palliative care was not part of its disaster relief efforts. Erickson-Hurt began looking for ways to implement it, confident that it could help address suffering across very diverse cultures. Teaching palliative care skills to healthcare professionals worldwide has become a key part of her mission with the healthcare NGO.

Erickson-Hurt has worked with Project Hope in countries such as Indonesia, Japan, Haiti and the Philippines, and is now teaching palliative care nursing in China. In 2017, Erickson-Hurt was among 15 nurses honored by the United Nations after being named Nurses with Global Impact.

When Erickson-Hurt began developing the Institute’s RN Certificate in Palliative Care course, she knew it needed to be online, interactive and instructor-led. That type of program wasn’t being offered anywhere else, and she believed nurses would overwhelmingly respond to it.

“I knew the value of online education, but I also knew how important it was to have a real person leading it,” Erickson-Hurt said. “It makes such a difference when students have someone who will engage and interact with them and help them to explore how to apply the training in their own lives.”

She said the course—recently updated with new evidence-based strategies for pain management, prognostic indicators, and non-pharmacological treatment modalities—is “really taking all the art of nursing and bringing it into how we care for a patient.

“It doesn’t matter what kind of nurse you are, somehow palliative care’s going to come into your practice,” Erickson-Hurt said. “If you can be comfortable talking about some of these difficult things with people and cracking that door open a little bit, it’s going to make a tremendous difference to your patients, and also in your own life.”